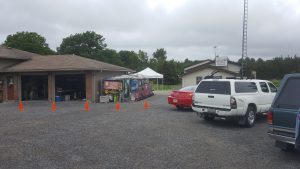 Last week as I posted in the Travel section, we made our annual pilgrimage to the wrecks in the St. Lawrence Seaway and I stopped by one of my favorite dive shops;Dive Tech in Mallorytown, Ontario Canada. It’s kinda funny but this dive shop is out in the middle of nowhere surrounded by farm fields and cows. You feel like you’ve driven forever and then all of a sudden there it is. More on the shop in the Shop page.

As I mentioned in a previous post, I have the Antares Oval glove system installed in my Fusion Drysuit. The problem is I never felt comfortable taking it on any deep or technical dives as it leaked on every dive in shallow water. I tried everything – lubricating the rings, waxing the rings, cleaning rings and doing the voodoo dance with chicken bones. Nothing worked, so I would just dive with wetsuit gloves (either Fourth Element or Henderson). Well that has changed. When I mentioned to Dan (owner of Dive Tech) how much I hated the Antares he said he had just what I needed. I went out and got my DS from the truck, still wet from the morning dives and Brian & Alex (two of the awesome staff that work there – Did I mention customer service is AWESOME at this shop) started to put together the system. 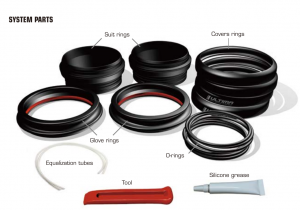 Since I had the Antares rings already glued onto the arms of the suit we got to skip that step. The new system can use the rings with no problem. The whole job took about 5 minutes to put the cuff ring in with my old silicone seals ( I would never go back to latex after diving silicone these last few years), a couple squirts of watered down baby shampoo and they slid into place.  It actually took longer to put the gloves on. The O-Rings that hold the glove in place are pretty beefy. They work the same way the Antares ring worked, by folding the glove in over top of the o-ring. Another difference from the old system where the ring was hard plastic and I broke 3 of the rings putting together. In the end I needed my wife to install the Antares, as she has more patience. On the Ultima the o-ring and glove are then pulled back to fit over the suit rings. The o-rings are really tight and it took two of us to get them over the grooves. Then you put the cover ring over the glove and o-ring. At first I thought it was a decorative cover, but now I think it gives more protection to the ring-glove seal.

There is a great post over at Scubaboard with Deep South Divers, a878bob and others really geeking out on all kinds of choices for gloves. It seems like a consensus was reached of using the SHOWA 720R Nitrile. I contacted SHOWA to send me a sample. When they arrives I’ll swap over to them and go for a dive at the local quarry (47° F at 58 FFW) and do an update.

Putting the gloves on the rings can be a pain, but with the jig a878bob demonstrated it might be easier. I just need to figure out how to make it. I have 8 dives on them so far to depths up to 118 FFW and not a leak yet.

Other than not leaking the next most important factor of dry gloves is how hard are they to don. Gloves that keep you warm and dry are useless if they take 20 minutes and /or need three people to don. I have to report that I found these to be extremely easy and could be donned by myself. To install the glove to the wrist mount I placed my hand and glove up to my chest, pushing in slightly. This starts one side, then I push down on the opposite side using the free hand. This then starts the locking process and you can feel the two pieces ‘pop’ together. As you see in the above picture, the system comes with a small amount of lubricant. Talking to Brian, he said not to use wax on the mating surfaces, but to use a light silicon grease. I mentioned that I use Christo-Lube MCG 111, because I got a really good deal on a couple of syringes of the grease so using it once in a while on my gloves rings wouldn’t cost me much. Getting them off was just as easy, I just put my wrist against my chest and using the other hand just pulled the glove off using the raised lip.

Simply scuba has a really great video on how to install the gloves, rings and how to don the glove. On replacing the seals, I noticed that they used the lubricant on the seals to make insertion into the suit ring easier. Brian and Dan recommended a diluted baby shampoo in a squirt bottle and it seemed to work well and it won’t damage the silicon seals that I use. To replace a seal, I had the bad luck to rip a seal the day after I put the system in 😥, you use the tool (looks like a plastic tire lever) to pry off the seal retaining ring (took about 5 seconds per side) take the old one off. Brian recommended putting the new seal on the second ring down so when you push it in it has room to move up a ring and not get caught between the ring and the suit retaining ring. Either way it took only a moment and I was back in business. This is similar to the Antares system, but as I said before this was never an issue with the previous system, just that it leaked all the time.

As I get more experience with the gloves I’ll post an update. Feel free to ask any questions in the comments and I’ll try to answer them.

This site uses Akismet to reduce spam. Learn how your comment data is processed.

Where else are we

So you've had 2 days of cuties, so now one of the mugglies 🤣 a Scorpiofish for your enjoyment. If you don't share this cuties, you're just heartless 🤣 Using my: Olympus TG-6, PT-059 enclosure, Backscatter M52 air, Backscatter MW-4300 & 2 Inon Z330 Type II strobes https://www.backscatter.com/?affiliate=U2FsdGVkX18HAQIDBAUCCTw+DT++GT8J6hKKveVKQlo= If you like any of my pictures and would like one of them on a poster and I'll upload it to Fine Art America (timetodiveus.pixels.com) or visit me there for one I've already uploaded. Also please share, as you know which of your friends might like to see them, get excited and start diving. Plus it helps me get more exposure. #stcroixusvi #fish #adventure #caribbean #ocean #underwaterphotography #usvinice #diving #scubdiving #scubadiver #reef #scuba #travel #dive #padi #macro #underwater #stcroix #underwaterworld #uwphotography #scorpionfish ...

This website uses cookies to improve your experience while you navigate through the website. Out of these, the cookies that are categorized as necessary are stored on your browser as they are essential for the working of basic functionalities of the website. We also use third-party cookies that help us analyze and understand how you use this website. These cookies will be stored in your browser only with your consent. You also have the option to opt-out of these cookies. But opting out of some of these cookies may affect your browsing experience.
Necessary Always Enabled
Necessary cookies are absolutely essential for the website to function properly. This category only includes cookies that ensures basic functionalities and security features of the website. These cookies do not store any personal information.
Non-necessary
Any cookies that may not be particularly necessary for the website to function and is used specifically to collect user personal data via analytics, ads, other embedded contents are termed as non-necessary cookies. It is mandatory to procure user consent prior to running these cookies on your website.
SAVE & ACCEPT